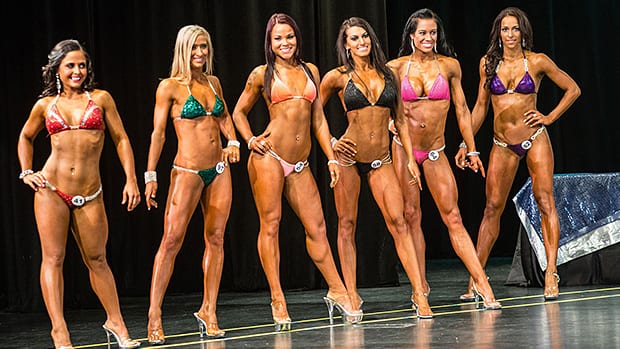 More than 600 women stand side by side and line up on the stage and pose their best where they are judged. They only wear a pair of bikini and high chunky heels.

United Kingdom Bodybuilding & Fitness Federation is known to organize a huge number of men’s bodybuilding and bikini competitions all throughout the year. These competitions draw millions of bodybuilders from all over the world. But one category which majorly earns dark and negative reviews is the bikini category.

One of the UKBFF spokespeople said

“Bikini-Fitness is a category where the athlete shows on stage that she has trained hard, keeps fit and lives a healthy lifestyle,”

This event is divided into three categories majorly for the first-timers. Juniors (16-23 years), masters (35 years and above) and a rookie.

“Now teeny tiny oranges, this is what your Mum & Dad looked like once upon a time, for a few hours”… – Teeny tiny 🍊: “But Mummy, why is Daddy’s body the same colour as his hair & why on earth did you both do that to yourselves in 2016?! ” – “Well Coco Carter (@mathewlcarter will never let me call her coco but I can dream)… watch the yuuuutuuube video in my bio & you’ll find out” Q&A is liiiive… Babies? Marriage? Getting real honest about our past body image problems 👶🏼 💍 All your questions answered ⭐️✨

“It was like a science experiment to see how I could change my body. I learnt so much about training and nutrition,”

When asked what does it take to reach there, then came the reply

“To compete, the girls have to embark on a calorie-controlled diet,”

explained the UKBFF spokesperson. Typically, this is maintained by cutting out major food groups like gluten and/or dairy.

uʍop ǝpısdn ɹǝʇʇǝq sı ǝɟıן 🙃 Had an hour of absolute calm this morning at home home before I came back up to the London nest 🐣 Feeling super tight after a week of whizzing down the slopes so I stretched it all out with a @FIIT yoga class & then a little play. Wanted you to see those facial expressions 👀 Want to workout with some of London’s best trainers? Yoga, Pilates, strength & cardio all from the comfort of your own home 🧡 Link is in my bio for your free membership ✨⭐️ *AF LINK

“They still have to eat very healthy food, like chicken, rice, fish, sweet potato etc, in small meals,” they said.

“Competing is not easy in any sport, and it takes dedication and willpower. It takes courage to go on stage and show the audience what you have achieved. Our advice is to always enjoy it.”

“None of them had any energy. All of them were drinking red wine to dehydrate. They were so drained and it was just so sad to see them.

“It’s a lifestyle for people but it’s not healthy,”

“It was awfully difficult putting so much pressure on my aesthetics for a prolonged period of time. You are focussed so much on the process, but at the end of the day you are literally just being judged on how you look – the judges don’t care how you got there,”

When asked what kind of support does the fraternity provides, then we got a reply that UKBFF runs posing courses for which the competitors can pay for. Here they are taught how to stand and pose correctly in front of millions of judges and audience.

When asked about the diet part, then is what the participants replied

“I literally couldn’t wait to have a bag of white chocolate buttons” said King, who headed straight to the food shops following her competition.

“I ate them before we’d even gotten round the supermarket. I showed the guy at the till my packet and he was like, ‘Have you just eaten that whole family bag?’

“I had to really learn to find that control again,”

She also revealed that post-competition she had no control and was eating for months.

Lastly, she concluded by saying that

Tummy talks with the tiny tank episode two ✌🏼 my timehop keeps producing pics of me when I was a v lean bean last year in prep. I want to talk to you about WHY having pics like the one on the left as your "goals" (if ur not competing etc.) is 👎🏼 whilst it looks great and is super instagrammable ofc- a certain amount of body fat is ESSENTIAL for your endocrine, cardiovascular, skeletal, reproductive and nervous system. Sometimes being "fit" and being "healthy" are mutually exclusive. Health looks different on every individual – someone whom you might assume is a healthy weight because they are slim, may actually have high amounts of visceral fat- which is the fat around our organs- 👎🏼much in the same way that someone who is super lean may look fit as a fiddle but they are making huge sacrifices to their health to achieve that aesthetic… it's obvious that someone who is very overweight/underweight may be putting their health at risk- but we can't always tell by sight whether an individual is healthy or unhealthy. In the above pic I'm showing MY body and how it looks when I am living two distinct lifestyles (prep/dieting/excess training vs eating intuitively/training moderately) BUT this doesn't mean it's representative of how you or anyone else will/should/could look. Although I'm a firm believer that it is more than ok to train for aesthetics, and because u want to look and feel good- health (feel like I've said that 18,000 times) should always be very high up on your list. This doesn't mean to say that you can't eat anything less nutrient dense and that you should be obsessing about your nutrition 24/7- because life is to be enjoyed, gin and tonics are made to be drunk and pizza and ice cream are there to be eaten- I'm just talking about the extremes- but also following that a complete neglect for an interest in your health can be just as damaging as over eating/ under eating/ over training/ being inactive. I'm still learning how to find my "balance" and understand how I can fuel myself and my lifestyle to make sure that I can party now but also run around when I'm 85, but I just wanted to share my thoughts on this with you! Happy Thursday #thetinytank

“It certainly is not a healthy lifestyle for anyone, constantly putting your body under stress both during prep and off season,

I personally would never compete again. I don’t think that I would gain anything from it and it definitely affected my mind set negatively afterwards when I was putting on weight.”