“I got married in 1999 at the age of 19. My first son came soon after in 2000 and my second in 2006. Naturally, I gained some weight. My husband (now ex) made sarcastic remarks about how I couldn’t lose weight even if 10 dogs were to chase after me. Though it may have been a joke, his remarks made me determined to lose weight.”

This is how Sheetal Kotak entered the gym. She started exercising regressively and maintained her distance from food. She also started drinking a lot. And that was the time when she was slowly getting into depression. She also started visiting a psychiatrist but every time she used to run away from the spot and again she was on the path of self-destruction.

Then she was referred to another psychiatrist who encouraged her to speak up. And the psychiatrist also asked her to use her bodybuilding and fitness mania as a tool to calm her mind. And soon she started enjoying her gym and workout sessions much more. Then suddenly her father died and she lost all hope in her life. She wasn’t ready to go to the gym. Her marriage was also not working out. She had kids but no job and by that time she was in extreme depression and ignorance. In 2011 she left her marriage. By 2012 she started her weight training. She did lifting and everything else from where women used to shy off. Gradually people started calling her “Sheetal strong”. That’s when Sheetal started believing in herself. In 2013, she was part of the muscle mania and surprisingly she won all the categories where she participated. In 2014 again muscle mania came to Nairobi and she won again. 2015 also proved to be a positive year for her. But in 2016 her mom was diagnosed with cancer. She left her training and that year she lost her title as well. But again in 2017, she hit back and gained her title again. She shares “It took some time, especially in the conservative circles of the Asian community, for some to come around to the idea that this is a sport like any other. I ignored the critics – I used was to being some kind of an outcast. But now many are proud of me. My mum has given me her blessings. Even the Asian Weekly has featured me and nominated me severally as the sports person of the year”.

Sheetal is fortunate to meet someone again in her life. The two are in a steady relationship for five years and are planning to get married soon. She says that her teenage sons are her biggest fans. Finally, she says “Exercise is my medicine. This sport has built my character. Even if you don’t get a trophy, the process of training – the pain, the discipline, the commitment – shapes you.

Coming from a place of such dysfunction and low self-esteem, bodybuilding has made me stronger, healthier and confident. If not for it I would probably be dead by now.” We also would like to salute her sportsman spirit. The lady is well known in Kenya and definitely has shaped up her life quite well through bodybuilding. Not only she has made up her muscles but also her personality as well.

All the best to the lady for her future competitions and her life journey. 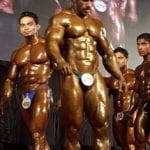 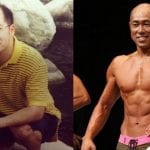