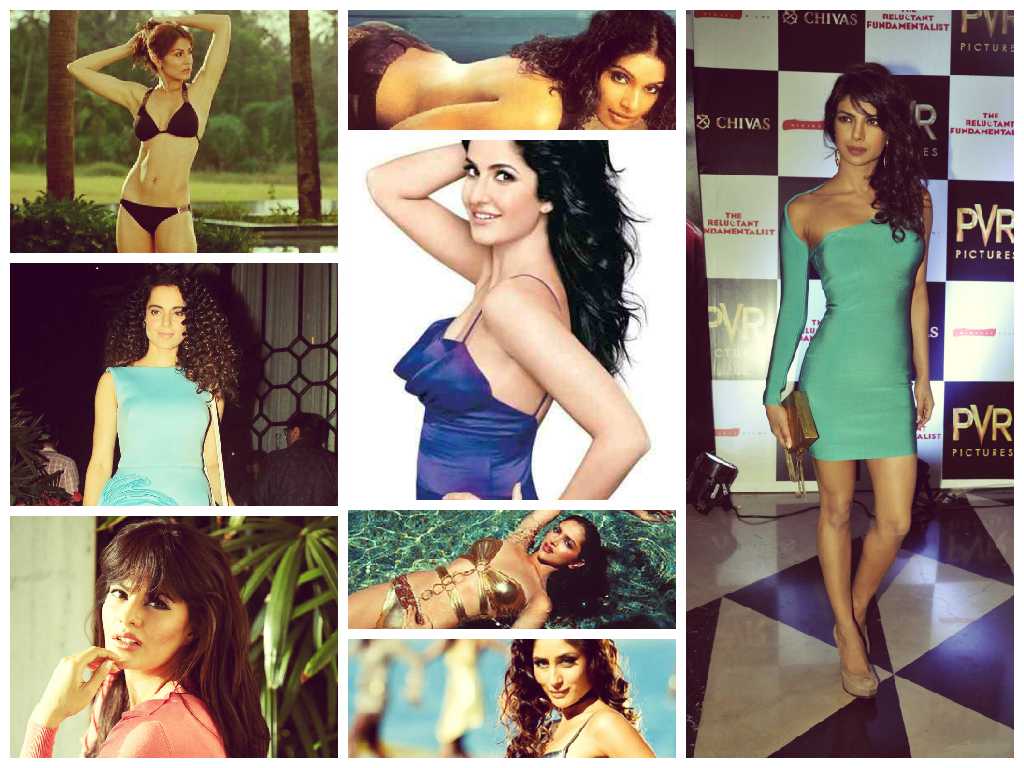 Bollywood or Indian cinema industry has never been on shortage of talented and beautiful actresses who are god gifted but some of the contemporary actresses has worked very hard to slim down for their movies. Sonam Kapoor, Vidya Balan, Sonakshi Sinha are some famous names who has shed oodles of weight to get in shape. After Kareena Kapoor’s movie Tashan in 2007, she sets a trend of slimming down or acquiring size zero.

Many celebrities have achieved size zero so which is technically a women clothing size standard of US size system. It means if a woman has 31.5 inches bust size, 23 inches waist size and 32 inches hip size then it would be known as size Zero.

Seriously 23 inches waist!!! It seems like a distant dream but many actresses has made it reality with their hard work and proper training. Let’s have a look at these sexy women.

Bollywood Actresses List Who have Shaped their Body Successfully:-

The actresses who has started the zero figure mania in the industry. She has lost eight kilos for her film Tashan in 2007 with the help of routine diet plan, hot and power yoga. She has denied every rumor of going under the knife or starving herself. Though, she has gained after that but she stills maintain an attractive figure. Read Kareena Kapoor weight loss tips

This 5’9″ star has debuted with movie Rab Ne Bana Di Jodi and then she was a bit chubby but when she was asked to shed excess weight for the movie Ladies vs. Ricky Behl, she has work very hard and done lots of cardio vascular exercises along with a strict diet. She achieved the zero figure and displays her bikini body in the movie successfully.

Although, this Sri Lankan beauty has never been fat but she has gone through intensive workout session to lose extra weight for the movie Race 2. She has also took up dance and stunt training which has reflected very beautifully in her role in the movie and in her dance sequence “Mujhe to teri lat lag gayi”. She has been counted among the size zero fraternity since then.

She is among the topmost actresses of film industry and very successful. She has a very beautiful and voluptuous body but she follows a strict diet and exercise regime to become super slim for her dance number “Sheila Ki Jawani” from movie Tees Mar Khan. Her new slim and sexy avatar has got her many accolades. She has maintained the gorgeous figure in her next venture Dhoom 3. May be she takes the zero figure to next level.

The former Miss World is not just beautiful but she is also a versatile actress. She has played many different and challenging roles and pull them off very well on screen. Many roles has demanded her in a lean and sexy avatar which she has fulfilled with her honest efforts. She has lost tremendous weight for her sports biography movie Mary Kom and attains a zero figure. She has flaunted her well toned figure in her Album “Exotic” starring Pitbull.

Kangna has been criticized for her lean body since her debut movie Gangster in 2006 but she has shut all mouths with her excellent acting talent. She is happy that she has a god gifted size zero body and she doesn’t need heavy physical training and strict diet. Though, Kareena has started the trend but Kangna is still the pioneer of Zero figure club.

The national level badminton player turned model turned actress gives credit of her lean and fit body to her athletic life. She claims that she doesn’t like to work much on her weight and thus choose roles which doesn’t require much her to lose or gain weight but still she has lost kilos for her role in movie Cocktail.

She is famous as the fittest actress of Bollywood film industry. She has launched her DVD of yoga exercises. She always keeps a tab on her weight and maintained a sculpted body. She is being envied by women as well as men for her perfect body. The secret of her zero figure is her disciplined lifestyle and workout plan.

The growing age has made the 5’8.5″ actress more beautiful and sexy. She looks drastically different from her look in Bazigar in 1993. She has attained her slender figure of size zero by yoga and weight training exercises. She has shed twenty Kgs post delivery to get in shape. She has divided her workout plan into two days yoga, two days strength training and one day for cardio exercise. She has launched her own DVD in which she teaches about the right way to do asana and pranayam.

The former Miss World has been known to maintain a lean and sexy figure but after delivery she has gained lots of weight. She has been criticized for not losing the post pregnancy weight but she took her time to enjoy her motherhood. In her recent appearances, she has shocked the world with her slim and sculpted figure. She has followed strict healthy diet and yoga exercises. She is not a workout freak but she did full cardio workout and functional training at home.

The talented actress and mother of two has maintained a size zero figure. Kareena Kapoor has recently said during a book launch that Karishma is currently the size zero queen of film industry. She has stunned everyone with her drastic weight loss after pregnancy.

Many new actresses like Esha Gupta, Nargis Fakhri, Evelyn Sharma, Sonal Chauhan, Chitrangada Singh are also having size zero figure. But the fans should always keep in mind that these actresses spends lots of time as well as money on their workouts. Some professionals thinks that this size zero trend can affect the young generation mindset. People have started consulting dietician for weight loss even when they don’t require it. Kareena also admits that this trend can also have negative impact and hence she suggest her fans not to follow her blindly. She says “What is good enough for me can never be good for you and vice versa,” she suggest about fitness by saying “All I can say is never starve. Eat right and you will go places both with your shape and your soul.”        So, fans should remember that attaining size zero is not important but becoming healthy and fit is more necessary. Say fit and live better!!!!!