Growth Plates – The Guide to Know, If You Can Grow More or Not? 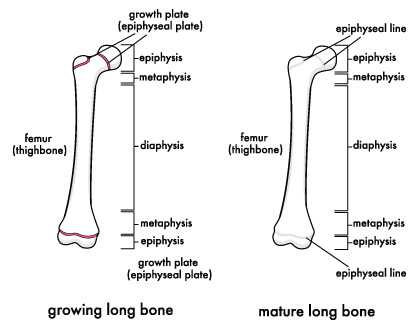 What are Growth Plates?

Growth plates are the area of the growing tissues at the each ends of the long bones in children and adolescents. These plates also known as epiphyseal plate or physis are the zones of cartilage. There are at least two growth plates in each bone which determines the length and shape of the mature bone. The growth plates contribute new bones to the existing bones to grow. Since these parts of the bones are soft, they are prone to injury during the developmental stages of a child. This bone region is sometimes weaker than the tendons and ligaments that connect bones to other bones and muscles. It is said that because of its soft nature, 30 percent of fractures in children can happen around the growth plates [1].

When do growth plates close in people?

Sometimes, during the adolescence, our body growth is incomplete. This is during this phase when the growth plates are closed and are replaced by solid bone. However, it is difficult to say exactly when each growth plates close because different bones stop growing at different times. The growing plates at the long bones have an average time when they stop growing. Most of the children after the completion of their pubertal growth stage grow for an average of another two years. The age at which the puberty begins is quite erratic and it depends on many elements including race, gender, and body habits. Generally, females stop growing at the age of 12 to 14 years while males stop growing at around the age of 14 to 16. [Read – how to grow taller at 16]. However, some children continue growing in height until their late teens but most of the growth in them stop by these ages [2].

When we think of growing bones, most of us have the idea that they grow out from the middle of the bone. But, it is the growth plates that help the long bones of the legs and arms to grow at either end of these bones. These growth plates produce new bone tissue for the growth of long bones and this is what determines the final length and shape of bones in an adult individual.

An injured growth plate fails to do its job properly, which can result in crooked or misshapen bones, very short limbs, or it can even cause arthritis. But fortunately, these happenings are very rare. Diagnosing this at the right time and proper treatment, growth plate injuries in children can be recovered without any further long-term consequences. [3]

Who Gets Growth Plate Injuries?

There are a number of factors that cause growth plates injuries. Most of the common causes of these injuries can be an event such as a fall or blow to the limb or injuries can also happen due to overuse. For example, a gymnast practicing on the uneven bars for a longer time, a long-distance runner, and a baseball pitcher practicing his curveball to make it perfect can suffer from growth plate injuries.

Although many people suffer from growth plate injuries caused by accidents during playing or any athletic activity, growth plates are also vulnerable to other injuries, like bone infection, that can reduce their normal growth and development.

Other probable causes of growth plate injuries include the following:

Can I Grow after Growth Plates are Closed?

This is the most frequently asked question by the people who are concerned about their body growth. Many doctors are of the opinion that it is very difficult for an individual to grow after the close of their growth plates. Thus, here we can conclude that after the growth plates close in a person, he or she cannot grow any further.