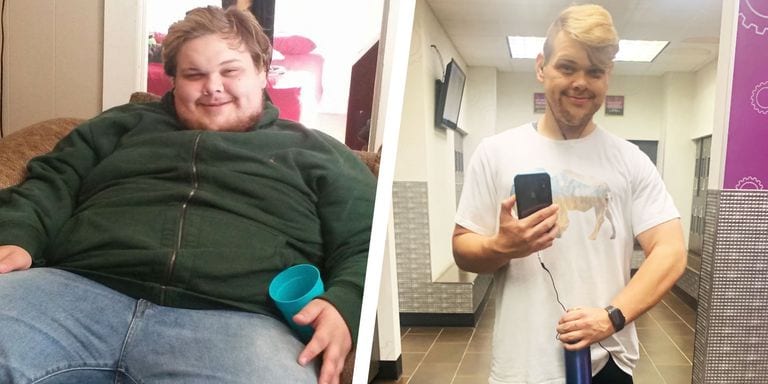 Brady Golden has always been an overweight obese kid. He was called as “Chubby” and he kept gaining weight all throughout his life. When he was at his fourth grade he weighed 180 pounds. And when he reached his high school he was weighing 350 pounds. He recalls

During his college days, he distinctly remembers

At his 21st birthday, he was weighing 501 pounds. His heart sank when he saw the number for the first time on the weighing scale. He was on his routine visit to the doctor, where when blood pressure was checked it was reasonably high.

Also, while he was on a plane to visit his parents, that’s when the reality sunk him and actually shook him.

“The airline told me I would need two seats, so they rescheduled me for another flight later in the day, and gave me a sign to put on the seat next to me that said something like ‘seat reserved for disability.’ That was pretty humiliating,” he says. “I was feeling very depressed—I thought all hope was gone, and that I’d just eat myself to death. My only hope was that I’d go in my sleep, and not from a heart attack or a stroke.” He joined a social platform on Reddit where successful weight loss stories were being shared. He quickly realized that he is not the only sufferer in this world.

He decided that he has to change his binge eating habits. He has to live his coke, sodas, and chips.

“I quickly realized that if I ate foods that were less calorie-dense, I could have much bigger portions, so I’d make salads with a literal pound of vegetables, eat whole bags of frozen vegetables—I still do this—and slowly fazed out the chips and other junk,” he says. Change didn’t exactly happen overnight, however—inevitably, there were setbacks. At first, he’d lose some weight, gain it back, and have to start over again. Cravings were the most difficult part to deal with: “There were countless nights when I would lay awake in bed fighting the urge to go into the kitchen and eat everything in sight,” he says. “When I would wake up the next day without giving in to the urge to binge, I would feel victorious.”

That’s how he lost more than 250 pounds.

Kudos to you boy.