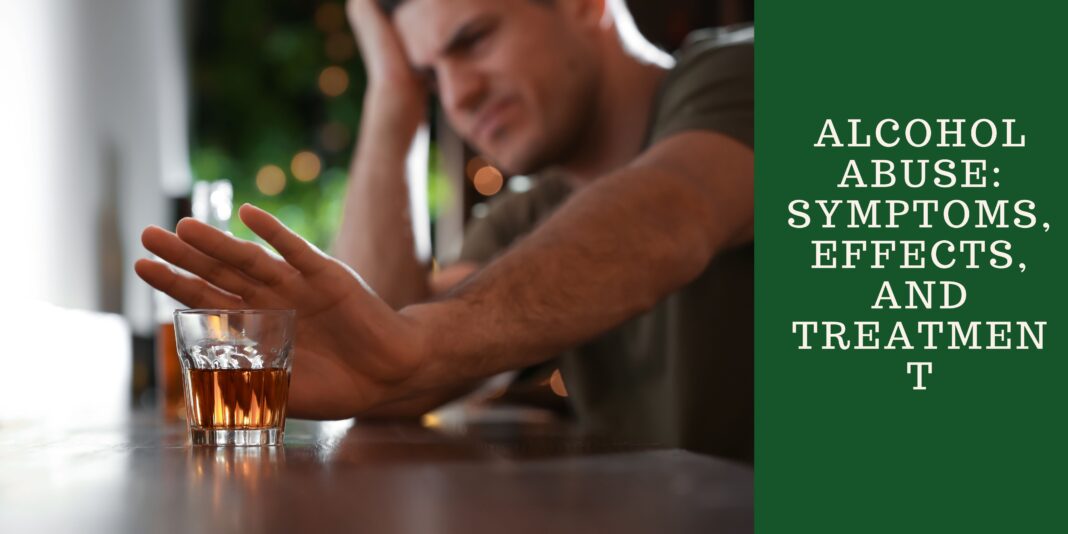 Alcoholism is a widespread problem. When people regularly abuse substances, they acquire a tolerance for them. It may be difficult to admit that you have an alcohol problem, and family members may struggle to recognize that a loved one has a sickness.

Understanding the indications, effects, and various treatments from a rehabilitation centre will help you recover if you or a loved one is battling alcoholism. The most critical facts about alcohol abuse are included in this article.

If you have reason to believe a family member or friend is misusing alcohol, stay vigilant for warning signals. Alcoholism manifests itself in a variety of ways. Some are self-evident while others aren’t.

While it’s easy to detect when someone has had a drink, someone with a severe alcohol addiction will require significantly more alcohol before exhibiting noticeable indicators. Individuals with a long history of alcoholism may be able to consume a substantial quantity of alcohol without seeming inebriated.

Alcohol addiction, for example, alters and destroys dopamine receptors. It can cause such harm that the offspring of alcoholics are at a greater danger of developing into alcoholics themselves. The likelihood of inheriting an alcoholic parent reduces with each generation.

Intoxicated persons who are alcohol dependent exhibit a range of behaviors. These early indications aren’t always associated with consumption, so it’s critical to keep these in mind while you rule out possibilities such as mental illnesses. While it’s socially acceptable to consume alcohol, long-term alcoholism isn’t. Those who are addicted to alcohol alter their behavior to conceal their drinking from loved ones.

Alcohol consumption can have a detrimental effect on your body. Even if the consequences of alcohol on your internal organs aren’t visible, it’s critical not to disregard the indicators of alcoholism. Numerous adverse effects aren’t detected until later in life, rendering many health problems irreversible.

The heart is particularly susceptible to alcohol’s adverse effects. Excessive alcohol use can gradually weaken the heart, reducing the supply of oxygen and nutrients to other critical organs. Excessive alcohol consumption can increase blood triglyceride levels. Triglyceride levels that are too high raise the chance of developing significant health concerns such as heart disease and diabetes.

Alcohol has an immediate effect on the brain. Not only can excessive drinking result in momentary issues such as memory loss and coordination, but it can also have long-term, irreversible, implications.

Drinkers who consume large amounts of alcohol are in danger of developing severe, even fatal, liver disorders. When you take a drink, your liver metabolizes it and excretes it from your blood. However, consuming an excessive amount of alcohol in a short period may overwhelm the metabolism, resulting in fatty liver.

Fatty liver disease is a chronic disorder that develops due to the accumulation of harmful lipids in the liver. Obesity is a significant risk factor for developing fatty liver disease. Additionally, it carries the risk of liver failure and type 2 diabetes.

While some people may endure a variety of unpleasant consequences, others may encounter fewer difficulties. However, excessive drinking has far-reaching implications that affect not only the alcoholic but also others around them. It has the potential to have a direct impact on your friends, family, and coworkers. Even short-term drinking repercussions can be severe, ranging from unintentional self-harm to drunk driving and criminal activity.

If you abuse alcohol, the first step is admitting that you need treatment. Individuals struggling with alcoholism can benefit from counseling. Each patient doesn’t respond to every treatment, so the sooner someone seeks assistance, the better.

You can treat alcoholism with behavioral therapy. Support groups, counseling, or a mix of the two may be used as a type of therapy. Certain prescription medications can aid in the treatment of alcoholism by assisting individuals in quitting or reducing their alcohol usage. Certain drugs may induce undesirable side effects.

Seeing a therapist during or following alcohol treatment may help you acquire new skills and practices for long-term sobriety. Certain individuals require only a brief, focused counseling session. Others may require longer therapy. Couples or family counseling may be beneficial as alcohol consumption can significantly impact those closest to you. No matter how hopeless an alcohol drinking disorder appears, treatment is possible.

You’ll be more equipped to overcome alcoholism if you know the warning signs, potential dangers, and accessible treatments. If you don’t realize your need for assistance, you’ll struggle with alcoholism indefinitely. You’ll continue to put your safety, work, and relationships at risk. Learn the essential details above to help you live without the dangers of alcohol abuse.