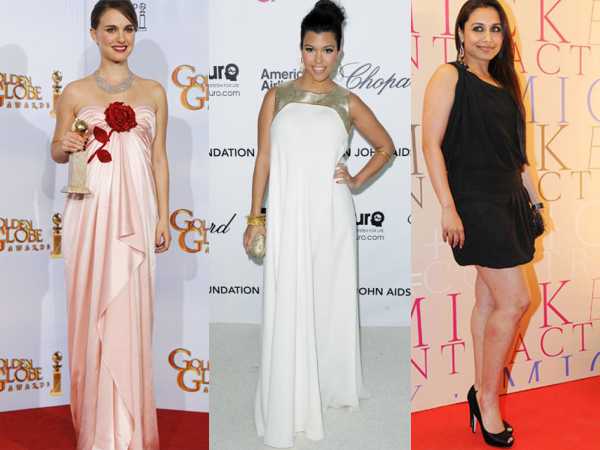 Bollywood and Hollywood are the most exciting industries which attract most of the people. These entertaining industries have always held a special place in our hearts. We all want to know each and every detail about our favourite celebrities. From how is their day to day life to whom they are dating to what they eat to what is their real height. We want to know it all.Though, it is said that Bollywood and Hollywood is the industry only for people with good looks and tall stature. But, we have witnessed many actors who are short but are most successful in the indsurty. There are a number of short female actors in Bollywood & Hollywood who rule the industry with their brilliant acting abilities. Here, we have listed some of the Bollywood and Hollywood female actors who are short but carry it with an omph.

Know for her dancing abilities and grace, this endearing diva has been able to rule the Bollywood with her dancing and acting performances. With 5 feet 3.5 inches tall, Madhuri Dixit isn’t blessed in the height department, but she has the power to make her fans walk behind her Grin. She is a perfect woman and a heartthrob of millions and a dream love of many. Half of the world will still skip a beat when they see her dancing on most of her dance numbers expecially on the tunes of “Dhak Dhak Karne Laga”.

This gorgeous heroine with husky voice is just 5 feet and 2inches tall. With this height, making a big name in Bollywood industry is just not easy but Rani with her acting skills has proved that one’s height has nothing to do with one’s talent and success. This Kuch Kuch Hota Hai girl is beautiful, charming and sexy and has been able to made it large in the acting industry.

This dusky beauty stands high at 5 feet 3 inches. She has entertained us since her Bazigar days with her beautiful looks and acting skills. Kajol has been a part of many commercially successful movies. With fashion transformation she has turned herself even more graceful and gorgeous than she was ever before.

Playing the role of a geek in the Hum Paanch to the Silk Smitha in The Dirty Picture, Vidya Balan has been entertaining us. Her acting journey has been amazing and has been ruling the industy with her excellent acting abilities. 5 feet 4 inches tall beauty, Vidya has a national award in her kitty which surpasses her short stature.

Any post on short heighted Bollywood actresses is incomplete without the mention of Minissha Lamba. This punjabi girl is just 5 feet 1 inch tall.

This American actress, model and singer is just 5 feet and 2 inches tall. Despite her short height she has been able to rose high in the Hollywood and still breaks hearts wherever she goes.She is also considered as one of the sex symbol of Hollywood and has been named as the Sexiest Woman Alive” by Esquire magazine in 2006 and 2013 and the Playboy magazine titled her as the Sexiest Celebrity in 2007.

This Oscar-nominated actress is a noted fashion fan and is tall about 5 feet and 3 inches. She has played significant roles in the movies including ‘A Nightmare on Elm Street’, ‘The Social Network’, and ‘Trash’. She also played the title character in the American version of The Girl with the Dragon Tattoo.

This American actress, comedian, voice artist, director, producer and writer garner fame and raise to stardom from the “Parks and Rec” series. She is only 5 feet and 2 inches tall. With her small stature, she has made it large with her skills and for her abilities, she has been nominated for Emmy Award for 15-time.

This Girls star and creator stands at a height of 5 feet and 3 inches. She has two Golden Globe Awards for Girls in her kitty. Dunham also garned the title of being the first woman to win a Directors Guild Award for Outstanding Director in the category of Comedy. She has also earned fame in the directorial field with her independent film ‘Tiny Furniture’ whihc she has written and directed.

This American actress has a height of 5 feet and 3 inches. She has appeared in many several television series and commercials before playing her first significant role of Jackie Burkhart on the television series tilted ‘That ’70s Show’. She has also given her voice to the animated character Meg Griffin for Family Guy. She got her breakthrough role in the romantic comedy-drama ‘Forgetting Sarah Marshall’.

Being an actress, producer, author, television director and singer-songwriter stands tall at 5 feet and 2.5 inches.As a child actor, Hewitt has appeared in television commercials and the series Kids Incorporated telecast in the Disney Channel. She rose to fame with her role in the teenage popular Fox series Party of Five (1995-2000) as Sarah Reeves Merrin.

Apart from this list of short female actresses, there are many other Bollywood and Hollywood actresses who are short from the standard height. But despite their short height, they have been able to make their name in the industry than most of the actresses who are taller in stature. From the success of these short actresses in the entertaining industry, we can conclude that height has nothing to do with success. Good looks is not necessarily needed to be preceded by tall stature to achieve success in the entertaining industry. People with any height can be successful with their talents and hard work. So, do not lose heart if you are short among your friends and family because it is not a drawback that you cannot overdo with your talent and hard work.

Previous articleGrowth Plates – The Guide to Know, If You Can Grow More or Not?
Next articleIs Coconut Oil Good for Dandruff