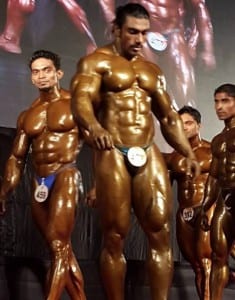 Rajiv Gandhi Global Excellence Award is an extremely prestigious award. The award is every year conferred to awardees in a different field who have done excellent work.

This year two major fitness icons have been conferred with this award.

Tarun Gill and Sangram Chougule have received this award.

Tarun Gill has received this award as the best fitness entrepreneur. Tarun Gill started his career as a marketing professional but at his heart, he was always a fitness enthusiast. But the 9/11 attack made him realize that MBA will help him get a good job. Tarun once remembers “During a freewheeling conversation, my manager jokingly suggested that I quit my job, pursue my passion for fitness and make a career out of it. I don’t know if it was a serious suggestion or if it was a back-handed compliment. Nevertheless, I couldn’t let go of the idea,”

Since then, he remembers “Work was never the same. It began to suffocate me. So I quit, but didn’t know what I would do next, because I observed that in India if I wanted to make a career in fitness, I needed to either be a trainer or be an owner of a gym. I wasn’t either of those. Yet, I knew fitness was my calling.” After two failed attempts to make it big in the fitness industry, he still wasn’t ready to give up even though he was unsure of what his next move would be. When he shared this dilemma with his wife, she had a simple solution. “She said, ‘why don’t you just share your thoughts and knowledge about fitness?’ And, a few hours later, she shot his first YouTube video which was about 20 minutes long. I didn’t have any agenda on my mind. It was a candid video.”

Now, this became a regular ritual where he started sharing his diet, exercise regime, supplements and a lot more on his YouTube channel. Very quickly he realized that his YouTube Channel has started growing. Today Tarun Gill is a well know YouTube influencer who has more than 5,00,000 subscribers.

Sangram Chougule is an Indian bodybuilder from a very small place near Pune.  He has faced a lot of hardships to achieve this position. And now he is considered as one of the most feared and revered bodybuilders of India. Sangram with his well behaved and symmetrical body went on to win Mr. World in the bronze category in the year 2011. He later won Gold for Mr. India also in the year 2012. The man who has always considered bodybuilding being his first love.

When people ask him what is his mantra for a hulking body like his, then the ace bodybuilder replies – work hard, eat healthy food and take proper rest. He has always been shedding misconceptions about this bodybuilding field. He said that many people believe that if bodybuilders do only weight training then they can achieve this hulking body and once they leave this, they will be back to their flabby self. Also, bodybuilders look best in their youth only, later on, they lose their body. But Sangram strongly believes that if you eat right and workout right, then you can have a good body for life long.

Sangram Chougule has received this award as the fitness icon of India.