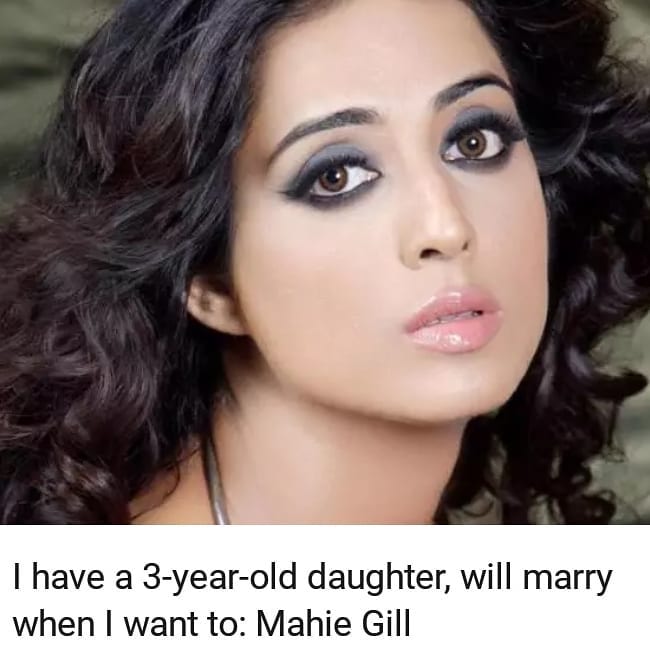 Mahie Gill is one of those unconventional actors who is known for solid acting. She has been in the industry for 15 long years but not done even 15 films. The lady has been a part of quite non-commercial but critically acclaimed roles.

Right now she will be wooing the audience in Jimmy Shergill starrer Family of Thakurganj. But the lady has been successful in keeping her personal and professional life separate. She recently removed the doors of privacy and shared

“I am very proud that I am the mother of a daughter. Yes, I have not been married yet, when I want to marry, I will do it. In August of of this year, my child will be three years old. My aunt takes care of her in Mumbai. I too live in Mumbai most of the time.”

She has named her yet to be three old daughters as Veronica. When asked why she chose a Catholic name, the lady responded

“Her name is Veronica. She lives with me. Why I named her Veronica – When Jesus was dragged on the cross and he was being taken to Jerusalem to be crucified. A woman dared to wipe his face with her handkerchief and his image got printed on it. That woman was called Veronica. And the meaning is- She who brings victory to true image. Thus I liked the name. And named my daughter Veronica.”

Currently, Mahie is also in a relationship with a businessman and both of them are believed to be in a live-in relationship. When asked about the same Mahie was quick to reply

Just spread your wings and fly away! #womensday2019 #balancefobetter #happywomensday

“I have a boyfriend. He is not a Catholic. He is a businessman. What to do by getting married? What is the need for marriage? It all depends on their own thinking and time. Families and children can be made without marriage. There should be no problem with having children without marriage, I do not think there is a problem. I am also ready to be the mother of all unmarried children. I think everyone has their own life, everyone has their own principles, to live a life, we must reassure everybody’s thinking. Marriage is a beautiful thing, but doing or not is a personal choice.”

Mahie Gill was in news in the past because of her link ups and her excessive alcohol abuse. Very few people know that she is a divorcee.

Stumbling on pictures makes me so happy. I am often stuck in reverse. The fascination with the past is hard to shake off in the present. Do you think we should cherish the past or just forget about it? I think it teaches us a lot and walking alongside past takes courage and make me realize the mistakes I have made, the achievements I have deserved. #throwback #tuesdaythoughts #stuckinreverse #reverie #past

The lady commented about the same and said

“I know my first marriage failed, but that was because I was very young and immature at that time. But now I am quite mature, and you know, I share a good rapport with my ex-husband. I still respect him and we do exchange messages often. We are in touch. But yes, I am over that relationship and now, I would love to re-marry and have kids,”

There was once a time when Mahie Gill was badly into alcohol.

What to do and where to start kind of day! When your things to do list is too big to fit into a 24hour schedule! Phew! #busybee #days #life #confused

“Mahie was a complete teetotaler. In SBAG, she was shown smoking and drinking extensively. She’s doing the same in the sequel, Saheb Biwi Aur Gangster Returns, which she shot drinking a peg of vodka every day. And due to this, she has actually started drinking and smoking — something that has not gone down too well with her parents.”

The source adds that the actor’s dad has given her strict instructions to stop it immediately.

“Her father has asked her to go to rehab. He is extremely angry and has made it very clear to her that she needs to end it all,”

When contacted about this news, all Mahie said was,

“I learned to smoke during the making of SBAG, and during this film, I’ve learned how to drink.”

Well, we are happy to know that the actress has gotten over off that phase and is happy inside out today.