Down Syndrome in Humans and Cats 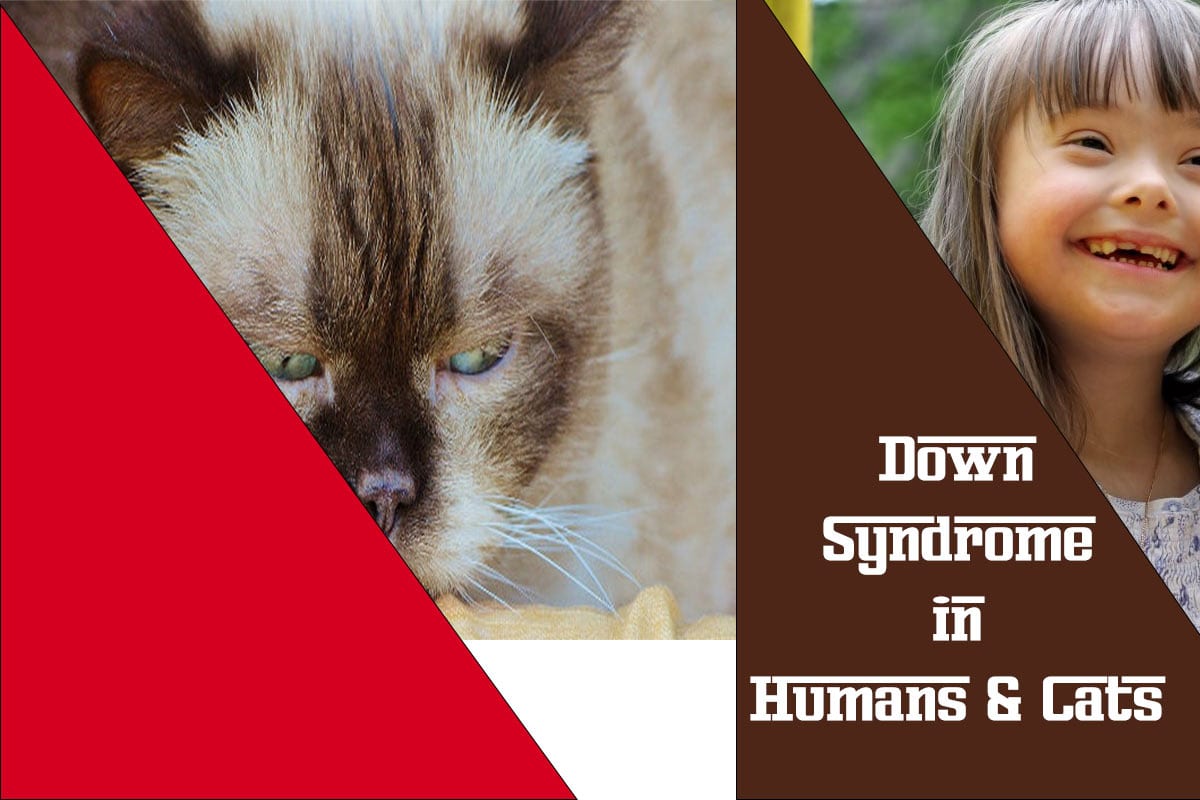 Down Syndrome is a human disorder, but can cats have it? This question has become quite common in recent years due to many stories being posted on the internet. The worldwide web as enabled pet owners to gain awareness about pet-related issues which they were previously unaware of. With pictures, videos of stories shared by pet owners on the internet about cats which appear and behave a bit different are becoming to be known as the “Feline Down Syndrome.” Although cats showcase specific behavioral and physical symptoms of the down syndrome, it is almost impossible for cats to suffer from the disorde1r.

What is Down Syndrome?

Down Syndrome can be referred to as a congenital disorder, which affects people both intellectually and physically.

It is caused due to a chromosomal defect. Humans have 23 pairs of chromosomes in the nucleus of each cell. People who suffer from Down Syndrome have 3 copies of either partial or complete 21 pairs of chromosomes. They tend to display specific physical characteristics such as short stature, low muscle tone, flat nasal bridge and also can present some forms of learning disabilities.

The Feline Down Syndrome

Like humans, cats have chromosomes, but only 19 pairs and while a human has 23 pairs. Since Down Syndrome is a genetic disorder and chromosomes contain our genetic material, a chromosomal defect is possible in both humans and cats, as a result of this, creating the possibility of cats also can suffer from Downs Syndrome.

However, Down Syndrome is not a well-understood issue by most people and can often mistake cerebellar hypoplasia, distal polyneuropathy, facial deformities, feline dysautonomia and Klinefelter Syndrome with Down Syndrome.

It is vital for pet owners not to self-diagnose their cats and consult a veterinarian, who are better trained and experienced in making a precise diagnosis. Most veterinarians would prefer using some form of Trisomy towards determining any sort of genetic defect.

Every living organism is made up of a genetic sequence present in the chromosomes. When a pair of chromosome showcase some form of abnormality, it implies that the cat might be suffering from some trisomy.

Specific physical and behavioral indicators can alert pet owners of the problem who can then consult a veterinarian and proceed with further testing to confirm the issue. However, pet owners do not need to panic and there ways to deal with pets with trisomy and other genetic defects, which does not involve putting them down.

Down Syndrome-like Symptoms in Cats

While it may be technically not possible for cats to experience Down Syndrome, they can exhibit symptoms similar to Down Syndrome which can include:

• Different or Strange behavior when compared to other cats.

In case your pet cat is showing any one or more of the above-listed symptoms, it is advised to consult your veterinarian towards finding out the actual cause of the issue. While cats cannot have the human version of Down Syndrome, they can suffer from a similar genetic disorder which can be referred to a feline version of down syndrome.

Putting down a pet can be quite emotional for most pet owners and an entirely personal choice, most cats suffered from down syndrome-like symptoms do not need to be put down and can continue to live with the pet owners.

Like humans with Down Syndrome, cats too need special care and attention and might live a shorten life. It is suggested to consult with a veterinarian regarding the unique needs and requirements of cats with these genetic disorders.

While the cat might not live a long life, pet owners can ensure making their shortened lives much more comfortable and peaceful.

5 Ways Your Dog May Improve Your Mental Health

To conclude, due to the difference in the genetic make up of humans and cats, while it is technically for cats to suffer from Down Syndrome, they can still suffer from other genetic disorders which might resemble Down Syndrome or suffer from a feline version of Down Syndrome which veterinarian and medical science is yet to explore fully.