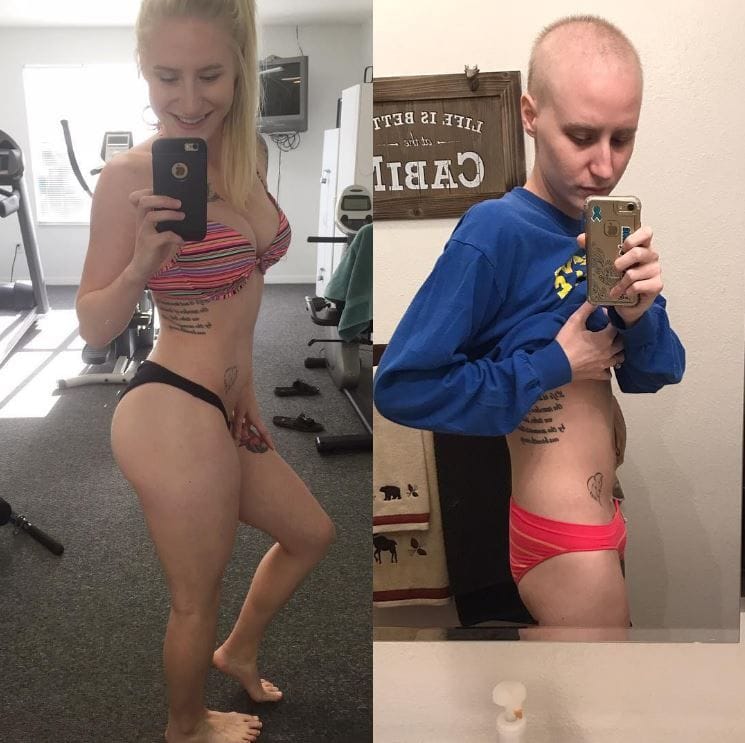 Life changed suddenly for female bodybuilder Cheyann Shaw when three weeks before her wedding she was filming a YouTube video in which she disclosed to the world that she is suffering from Ovarian cancer. She wrote

Spent my morning at @moffittcancercenter for my 3 month CT scans and I can’t thank y’all enough for all the prayers and positive vibes🦋💕 I meet with my doctor on Monday to go over the results and I’ll also get my CA125 checked👌🏻 As always, I’ll update you when I know the results😊 A lot have asked how long I’ll have my port in for and I believe it will be for 5 years and I’m fine with that. I actually forget ol’ Peter the Port is there half the time🤣 I won’t lie, the anxiety/scananxiety will always be there no matter how far out of treatment I have been, but wearing my shirt makes things just a little bit better; especially when you see other people at Moffitt smiling at your shirt💕 – – Now I’m going to stuff my face full of food because ya girl had to fast since 11pm last night and I’m HANGRY😭😭🤣 #putallthefoodsinmybelly #cancersurvivor #healthylifestyle #healthyeating #balance #godisgood #lifeaftercancer

Shaw was detected with stage 4 low-grade ovarian cancer. This is a rare but slow growing stubborn strain which is resistant to even chemotherapy treatments. She started her chemo sessions four months back and some times back only she realized that they are not working for her anymore. She even went on to shave her hair and filmed the entire video.

(SWIPE👉🏻) Today is National Cancer Survivor Day!🦋 A day that I honestly didn’t even know existed but is now a day that means so much to me. – – On August 3rd, 2016 is when I was diagnosed with a rare form of ovarian cancer and in that day I felt alone. I couldn’t find anyone my age who went through or was going through what I was. That is when God put on my heart to just be transparent. Share my battle with the world…to this day I have not regretted that decision. – – I wanted to share my battle because I wanted to be a voice for those who no longer had a voice. I wanted to show those who are struggling that they can do it, but it won’t be easy. I wanted to help those who felt alone in their fight, not feel so alone anymore. – – For those of you who are battling, keep battling. You will have days where you don’t know how much strength you have left, just remember that you have already come this far. The enemy will do whatever he can to knock you down, but you have proven time and time again that YOU ARE STRONGER! Keep getting back up and keep throwing those punches, each time harder and harder, because soon they won’t be able to get back up💪🏻 – – #cancersurvivor #ovariancancersurvivor #nationalcancersurvivorsday #ovariancancerawareness #cancerawareness #strongagainstcancer #bethelight #blessed #godisgood #thankful #healthyliving #uwmedicine #seattle #uw #ned #happyandhealthy #stage4survivor #fitspo #fitness #bestrong #bestself #selflove #positivevibes #lifeaftercancer

She has been diagnosed and re-diagnosed and since then she has moved from Florida to Washington to stay closer to her family, friends, and specialists. She underwent various surgeries to remove her reproductive organs, appendix, spleen and even part of her colon along with a tumor from her abdomen. And doctors have said that she still has cancer in her lymph nodes.

Happy Halloween everyone!👻🎃 2 years ago today I was getting ready to have my major cancer debulking surgery and it still blows my mind how fast 2 years has actually come and gone. 2 years have come and gone and now I’m getting ready to celebrate 1 year of no evidence of disease! So much can change in a blink of an eye and so much can change in a year. Whatever you are facing no matter what it is, keep fighting, keep getting back up, and know that it will not last for ever🦋 – – #happyhalloween #cancersurvivor #ovariancancer #ovariancancersurvivor #blessed #healthyandhappy #ned #blogger #lifestyleblogger #healthblogger #fashion #fashionblogger #nevergiveup #tampa #moffitt #seattle #uwseattle #2years #timeflies #target #targetstyle #lifeaftercancer

She was earlier a 130-pound bodybuilder and later declined to 102-pound cancer patient. But the lady is positive on her treatment.

“I decided to document everything right after I got diagnosed because I wanted to show people what cancer does to a body,”

“to show people that with a positive mind, you can beat this.”

Shaw who is just 23 years old is an athletic girl. She used to play basketball, soccer, softball and even used to race BMX. Then three years back she got serious about her fitness. She started getting into bodybuilding competitions since last year only. And just before the last summer, she was prepping for her first competition when this crisis hit her.

She had some symptoms since last year only, but her doctors said it might be some torn abdominal muscles from working too hard. But when the pain became unbearable and she started making regular rounds to emergency departments, that was the time when she quickly came to know about the deadly Ovarian cancer.

“Today, August 3rd, 2016 is the day that has changed my life for the moment,” she wrote on Instagram. “I found out today that I have been diagnosed with cancer. . . . I never in a million years thought this would happen to me, especially since I am only 23, but I know I will win this battle.”

“I’m literally going to show you the good, the bad and the ugly,” she said on YouTube, adding, “I’m literally showing you guys everything just so everybody is more aware of ovarian cancer because they do call it ‘the silent killer.’”

Ovarian cancer is said to be an uncommon type of cancer among the 20,000 US women diagnosed every year. But this form of cancer accounts for the most number of deaths but still, it accounts for only 3% of overall cancer.

April 27th is a big day for me because it was my very last day of Chemo🦋! One year of being off Chemo!! LIKE WHATTT!! It’s crazy to think that time is flying by so quickly and so much has changed since 1 year ago🦋 In 2 weeks, I have my big 1 year check up (1 year of being off Chemo and 1 year since my last scan) and I’ll be getting a CT scan, blood draw, and meeting with my doctor. I won’t lie, scanxiety is real and this morning I woke up anxious, which is obviously normal after going through what I went through😅 I know my scans will be great like they always are so I’m not going to let this scanaxiety bring me down!🙌🏻 I can’t thank God and my doctors enough for never giving up on me and I can’t thank y’all enough for all your prayers, love, and support 🦋 – – Now I’m off to go celebrate because even the smallest victories should be celebrated ❤️ – – #ovariancancersurvivor #ovariancancerawareness #cancersurvivor #blessed #godisgood #selflove #bestself #btbychallenge #fitness #happyandhealthy #nevergiveup #lifeaftercancer

Regarding her future plans she shares