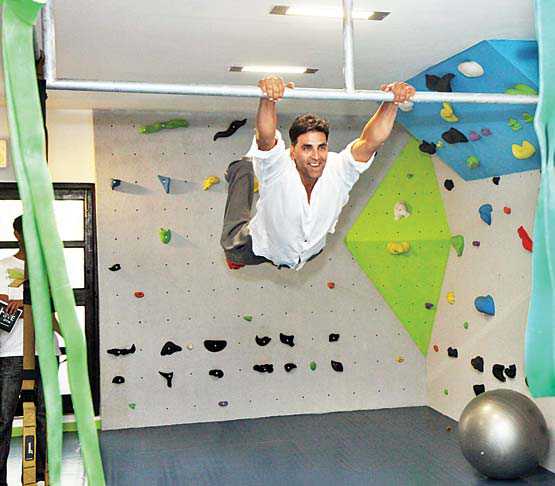 Akshay Kumar, fondly called Khiladi Kumar, is stilling ruling the roost in Bollywood. His toned body and abs and excellent acting sklls could give young actors a run for their money. Akshay, who is a Punjabi munda, is 47-year old and married to former actress Twinkle Khanna. They are proud parents to a son and a daughter. Despite his age, Akshay follows an elaborative workout schedule and diet plan to stay in shape. His name in the Hindi film industry is synonymous with health and fitness. Akshay is known as an action hero, who even has some good comedy movies to his name.

The self-made superstar, it is not widely known that even before Akshay entered Bollywood, he used to be a fitness freak and practiced martial arts. He was awarded the prestigious black belt in Taekwondo. Later on, he moved to Bangkok and Thailand to further learn other forms of martial arts and Muay Thai. Akshay kumar’s fitness still makes him top among other superstars. After years of tough physical training, follow his fitness routine strictly, and practicing adventure sports, Akshay found himself confident enough to perform his own stunts. He doesn’t use a body-double in his films. Despite his packed schedule, Akshay makes a point to stick to his diet plan and exercise regime and this is why he has a body to lookout for!

What if we tell you that Akshay treats his body like a temple and stays fit without really hitting the gym on a regular basis? Who wouldn’t want a body like him? Wouldn’t you want to know his secrets of staying in the best of physical health, especially when you don’t have to sweat out hard in a gym?

If you wish to get your hands on his highly effective fitness secrets, scroll down to further read his exercise and diet plan and know what you can do for staying fit.

Unlike many other A-listers of Bollywood, Akshay does not swear by any physical trainer. He is his own trainer and does what likes to do to keep himself hale and hearty. While he may go to a gym on regular basis, he doesn’t have a set pattern of exercises, he keeps changing them as per his mood and convenience. He believes on the natural methods of staying healthy and free of diseases. Akshay once said that he would prefer to climb a 50-storey building twice rather than doing repetitions of dumbbells.

Also Akshay loves indulging in outdoor workout activities such as rock climbing, basket ball, freestyle workout, anything which is closer to the Mother Nature.

His regular practice of martial arts keeps him fit for this action movies and otherwise also helps him maintain his physique. Akshay has always advocated the cause of including martial arts in school curriculum to gives proper physical training to the kids since their early age.

He prefers lean body over a bulky figure which he doesn’t find really appealing. Also Akshay’s workout regimen depends on the look required in his movies. For movies like Boss and Baby in which he was seen performing dangerous stunts, he went through a different exercise regime.

The showbiz business undoubtedly has fame and money but what comes complementary to all these benefits is- STRESS. There are new physical challenges everyday that are straining and take toll on both body and mind. In such a scenario, one needs to be at calm to manage stress as well as curb the risk of lifestyle disorders. Yoga and meditation have proved surprisingly beneficial for Mr. Fitness of Bollywood. He practices pranayam, Yamas, Niyamas, Santosha, and meditation to calm his mind and harness his inner energy.

For having a holistic approach towards fitness, Akshay sometimes combines yoga and the fun exercise swimming. He loves swimming and finds it more entertaining and calming to practice yogic exercises in the pool. Once Akshay’s fellow co-star in several movies like Baby and Special 26, Anupam Kher tweeted that just by looking at Akshay doing underwater yoga, he (Kher) would get a better body within a month.

Our favorite superstar believes that any workout schedule can never be successful if not supported with proper diet and right eating habits. Also he says that getting into fancy dietary plans is not required and that’s why our ‘International Khiladi’ sticks to homemade food. Indian food cooked normally without the excessive use of oil and spices is what the actor supposedly calls his favorite food. Read further to know what Akshay eats throughout the day:

Breakfast: Akshay believes on a king-size breakfast. His first meal of the day is usually heavy and includes:

Lunch: As stated above, Akshay prefers food from home rather than eating out. Also he doesn’t really live on a diet full of salad and boiled vegetables. His lunch comes from his home and usually contains a bowl 0f rice, dal, chappati and sabzi. It is a complete meal to keep him energetic throughout his busy, action-packed day.

Some of the sources from the sets of those movies in which Paresh Rawal and Akshay Kumar have worked together claim that Akshay is a huge fan of Gujarati cuisine and whenever he is shooting with Paresh, he makes a point to raid his lunch box and savor on Gujarati delicacies.

Dinner: Talking about what Akshay eats in dinner, he tries cutting down on calories before going to the bed. The last meal of the day is usually low on carbs. He just takes a bowl of soup, salad and boiled chicken.

Between the meals, Akshay have dry fruits as snacks. He doesn’t take tea and coffee. The purpose of having dry fruits is to include healthy carbs in his diet and avoid consuming oily and spicy junk food. Cashews and Pistachios help in maintaining low cholesterol level whereas the essential fatty acids present in almonds promote blood circulation and reduce high cholesterol. Keeping the amount of energy that Akshay requires to smoothly cruise through his hectic day at movie sets, raisins prove a power house for him. It is because raisins are high on magnesium, iron, potassium and phosphorus.

In many of his interviews, Akshay has said that in order to remain fit and in perfect shape, he has to curb his cravings for sweets. However, when it comes to Sunday, Akshay eats whatever comes his way- whether it is gulab jamun or ice cream. Akshay treats himself on Sundays.

Apart from following his healthy diet, he also makes a point to consume amla juice every day. Well, looking at his physique at this age, we can certainly say that Akshay has been doing it right and living a healthy life despite the time restrictions and stress he has on a regular basis.

In an interview to completewellbeing.com, Akshay when asked what does energy mean to him, he answered, “It’s all about being positive. It is also about being fit, healthy and having a lean body. Today’s mantra, I feel, is ‘health matters most’. Life is super-hectic—you barely have time to take a deep breath, and the stress never seems to go away. To cope with this, you need to be physically fit and be able to find your inner balance. This applies to everyone, not just to those in the show business.”

Some dos and don’ts straight from Akshay’s lifestyle

He added that, “All that is shown onscreen might not be real either. I don’t endorse these six-pack or eight-pack abs. I believe in the natural way of maintaining a good body.”

Another advice that Akshay gave to his fans on muscle-building was, “Any obsession with muscle-building is really unhealthy—it may lead to a lot of physical wear and tear. And unless you want to be a wrestler, all that bulk does not look too great either. Being lean and fit, I believe, is more graceful.”