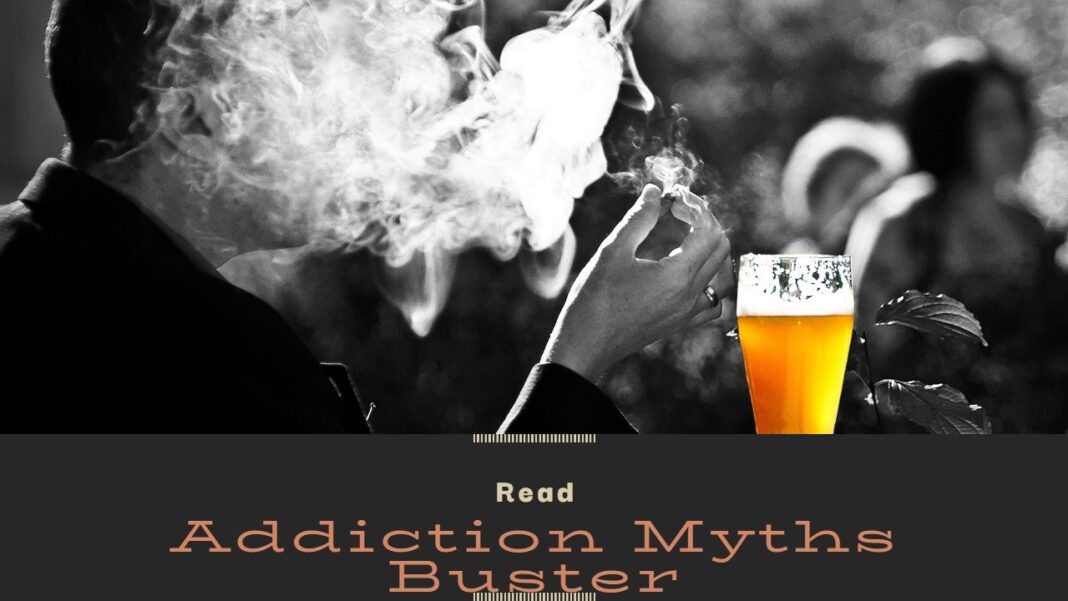 Addiction has a complex mechanism and can affect anyone, regardless of their personality or temperament. In fact, a 2011 review published in the journal Evaluation and the Health Professions looked at data from 83 large-scale studies. It showed that, at any given time, approximately half of the US population shows signs of an addictive disorder.

We already know that some people can use alcohol or drugs occasionally, but their effects don’t result in regular use, while other might try a substance for the first time and it leads them to crave more almost instantly. On the other hand, many people develop addictions that don’t involve any substances such as gambling or shopping.

So what makes some people get addicted to certain substances or behaviors while others don’t? One factually incorrect explanation was that they have “addictive personalities”. We tend to use the word addictive and addicted a lot to everyday circumstances. We say that a show is “binge-worthy”, a book is an “addictive read” and we describe other people as “adrenaline junkies”, “workaholics”, “chocoholics” and “caffeine addicts”. There’s also scientific evidence indicating that having one addiction increases the risk of developing co-occurring addictions. For example, being addicted to gambling and alcohol at the same time. It’s also quite common for someone to give up one addiction and then to replace it with another.

These factors, combined with a past notion that addiction is a moral issue that has to do with someone’s character may have contributed to the idea that someone can have an addictive personality and that’s the explanation behind their behavior. 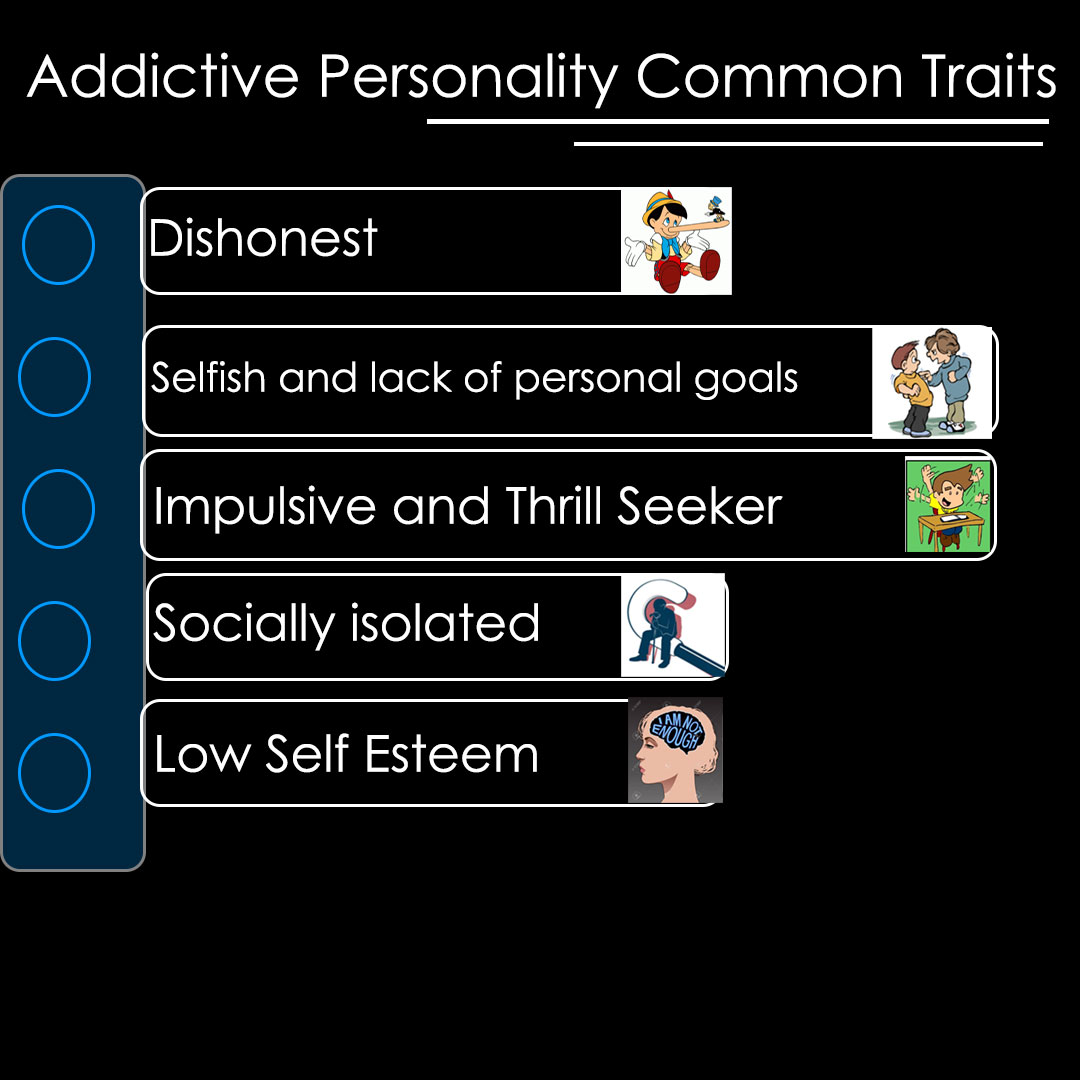 How is Addictive Personality Described?

Since there is no standard, scientifically validated definition of an addictive personality, people use the term to refer to a set of characteristics they associate with people suffering from some form of addiction:

a.  People with “addictive personalities” are dishonest and they manipulate others to hide and fuel their addiction

b.  They don’t take responsibility for their actions

f.  They have low self-esteem

Now, if you look at these traits, you realize they are actually a collection of “character flaws” we think explains why a person has developed an addiction. It takes a moral dimension. If the person in question was mare confident, less selfish, focused on their goals, and valued their social support system, they wouldn’t be in this situation.

Although some personality traits have been linked to addiction, they are not the ones from the above list. Neuroticism – the tendency towards negative thought patterns and emotions – has been associated with substance use disorder, but it’s not predictive of addictions since many highly neurotic individuals are not addicted to anything. Likewise, agreeableness and openness, which leads to forming more social connections, have not been shown to reduce the risk of substance use disorder. 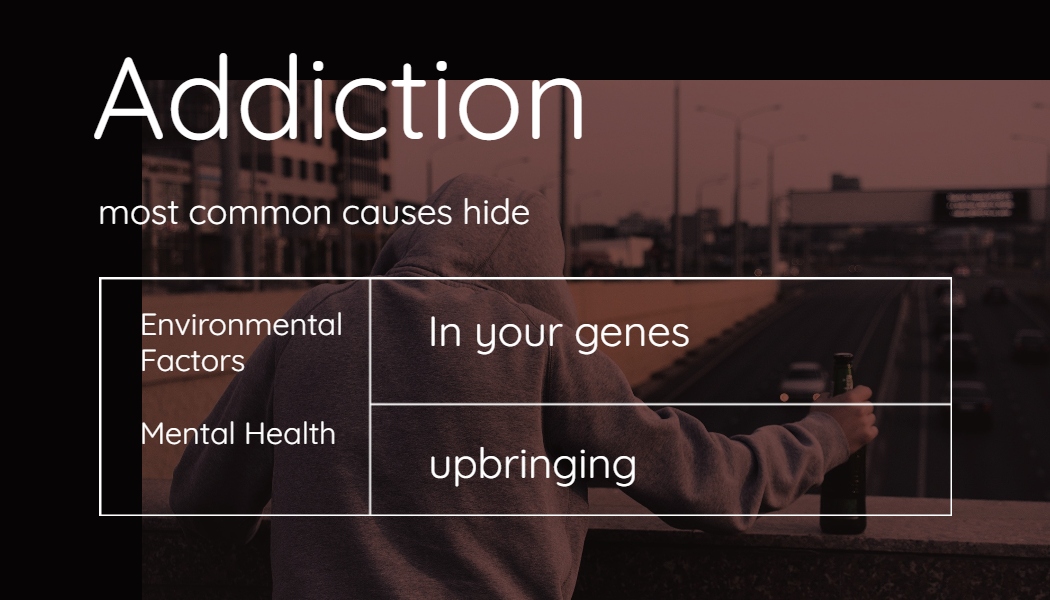 What are the Real Causes of Addiction?

By now, we know that the biological process that leads to developing an addiction involves the reward pathways in the brain. A substance or behavior triggers large amounts of dopamine that stimulate these reward pathways resulting in euphoria. However, too much dopamine can lead to psychotic symptoms so the brain adjusts by deactivating some of the receptors which mean that you’d need more of the drug to get the same effect – the person is building tolerance.

Deactivation of the dopaminergic receptors also leads to anhedonia – the individual can no longer derive pleasure from simple day-to-day activities like spending time with friends, watching a good movie, going for a walk, etc. They need more and more of the substance to get any kind of satisfaction. Other areas of the brain responsible for emotional regulation, impulse control, and decision making are also affected, and it can take a long time for these changes to be reversed.

That’s why rehab centres stress the importance of continuing treatment after discharge, as an outpatient. While in the rehab facility, the individual gets services that make it easier to cope with withdrawal symptoms, and they’re away from their usual triggers. Once they’re out, they have to keep seeing their therapist and attend group sessions so they can gradually develop better coping mechanisms to life stressors and learn how to deal with cravings.

Although we understand the biological process behind addiction, no single factor or personality trait has been shown to cause it.

Instead, researchers have identified a set of factors that increase the risk:

a.  Genetic factors – Our genes account for 40 to 60% of the risk of developing an addiction.

b.  Upbringing – abuse or trauma during childhood also increases the likelihood of someone using addictive substances earlier in life. Moreover, having neglectful or uninvolved parents has also been associated with drug misuse and addiction.

c.  Environmental factors – Easy access to addictive substances increases the chances of addiction, especially if you see a lot of people around you engaging in this behavior. If you’ve been exposed to this type of environment early in life, you’re more likely to resort to drugs or alcohol to cope with stress and negative feelings or as a means of bonding with peers.

Reducing the complex mechanism behind addiction to the idea of “addictive personality” is harmful because it suggests that the majority of people struggling with addiction have negative traits such as being manipulative. This might make it more difficult for them to get support from their social network.

It also makes people that don’t find themselves in the supposed traits of “addictive personality” think that they’re less likely to develop an addiction so they can afford to experiment with addictive substances. In reality, anyone can develop an addiction – even if they’re confident, honest, goal-oriented, and have a lot of friends.